This is a Japanese television report about the USS Ronald Reagan’s role in disaster response:

A news story about the Ronald Reagan’s disaster relief efforts in Japan:

ON BOARD THE USS RONALD REAGAN — When U.S. Navy helicopters swept down on the school in a ruined Japanese village, survivors first looked hesitantly from the windows. Then they rushed out, helping unload food, water and clothes. They clasped hands with the Americans. Some embraced them.

“They are like gods descending from the sky,” said a tearful Junko Fujiwara, 37, a secretary at the elementary-school-turned-shelter in the northern coastal town of Kesennuma. “It’s cold and dark here, so we need everything: food, water, electricity, gasoline, candles.”

Much of what the Americans have handed out are goods taken from their own ships: extra food and blankets, and even the sailors’ own clothes.

There were stuffed toys for children, too.

To alleviate food shortages in the shelters, the Ronald Reagan sent 77,000 frozen hot dogs to a Japanese warship, which boiled them and gave them out.

I wonder how much more could be “handed out” if the Ronald Reagan was supplied for a disaster instead of war. 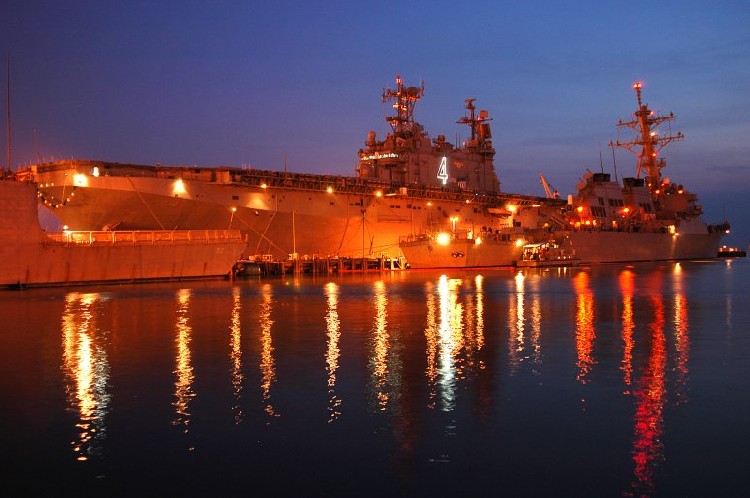 This evening I somehow found myself at Stratfor.com. The free report I received in exchange for my email address said that the Tarawa-class amphibious assault ship USS Nassau is scheduled to be decommissioned on March 31st.

This warship has already responded to many disasters. As of this writing, the USS Nassau’s official navy page says the crew is preparing for decommissioning by removing the diapers and baby food:

NORFOLK, Va. (Feb. 3, 2010) – It’s a little known fact that U.S. Navy vessels, such as USS Nassau, carry not only supplies and food for Sailors and embarked Marines, but also for babies in times of need and humanitarian relief.

As Logistics Specialist 2nd Class (SW/AW) Daniel Shelton carried boxes of diapers, baby food, and other infant supplies out of the Evac Storeroom and into Nassau’s Hangar Bay, he explained that merely providing diapers and food like in Haiti can bridge gaps between cultures.

“Language isn’t important when you do this kind of work,” said Shelton.  “If you possess the human emotion of empathy, you can communicate with anyone from anywhere in the world.”

Although a large amount of baby supplies were given to infants and families in Haiti last year, Shelton and other Nassau Sailors still kept the storeroom stocked in case another tragedy occurred while deployed.

“Participating in humanitarian relief shows the world that we are more than just a military force,” said Shelton.  “We have feelings too.  Going there and simply handing out diapers along with other supplies made the Haitian people greatly appreciative.  They may never know what it took to get it to them, but they’re so grateful of that gesture and will remember that somebody cared enough to get down there to get it to them.”

In about an hour, Shelton and other Nassau Supply Department Sailors filled three giant boxes to the brim with all of their baby food, formula and diapers so that other ships can use them.

Ships with large deck areas really are invaluable when responding to a disaster. The USS Tortuga is currently being used to transport 93 Japan Defense Force vehicles to the tsunami site.

Enterprise is currently in the Mediterranean with its strike group, and it’ll be over 2 years until the Navy is planning to not have it in their fleet.

The USS Nassau is getting transferred to the Military Sealift Command in two weeks. Strictly speaking, amphibious assault ships such as the Nassau might be more appropriate for “dedicated disaster response” than the USS Enterprise. The planet needs 3 such ships. We ought to get started with this one.

[USS Nassau has] 1,400 compartments, nine elevators and two horizontal conveyors. She also has two boilers — the largest ever manufactured for the United States Navy. They can generate a total of 400 tons of steam per hour and develop 140,000 horsepower or 104 megawatts (MW). Nassau’s electrical power subsystem creates 14 MW to provide electrical power for the ship. She has air conditioning equipment rated at a total of 1500 tons (5.3 MW) and can ballast 12,000 tons of seawater for trimming the ship to receive and discharge landing craft from the well deck.

Here’s a Wired story on what the Navy’s doing in Japan:

… The contamination may be spreading. But so is the Navy’s assistance role in the relief effort. The 7th Fleet said it expects the U.S.S. Tortuga to arrive on Tuesday at the eastern coast of Hokkaido, carrying two heavy-lift MH-53 helicopters. It’ll pick up Japanese troops and vehicles and send them on to Aomori, in northern Honshu. Four more ships are expected to arrive starting on Wednesday: the Blue Ridge, the Essex, the Harpers Ferry and the Germantown.

Retired Capt. Jan van Tol, who commanded the Essex during the 2005 tsunami relief missions in Indonesia, explained that heavy-lift helicopters are needed “given the likely damage to coastal transportation infrastructure and the rugged Japanese terrain.” He told Politico, “Essex is on her way up from Malaysia (means a week away…), and other big decks will no doubt be assigned. They’re the real assets for this given their heavy helo lift capacity, though the carriers will no doubt get the headlines with their SH-60s. Remember that operating the heavy helos is not merely a matter of the deck space (of which the CVNs obviously have a lot more), but also of the aircraft maintenance capability needed to keep the helos operating (and I expect they’ll be worked very heavily).”

Just read this morning that one aircraft carrier is already in Japan, and a second is en-route.

WASHINGTON, March 11, 2011 – The United States is prepared to help Japan deal with the aftermath of the massive 8.9 magnitude earthquake and tsunami that struck today “in any way we possibly can,” Defense Secretary Robert M. Gates said in Bahrain.

“I’ve been kept informed all day long about the tsunami in Japan, the earthquake and tsunami,” said Gates, who is on a trip through the Middle East and Europe. “As best we can tell, all of our people are OK, [and] our ships and military facilities are all in pretty good shape.”

The secretary said that although Japan is a very sophisticated country, “this is a huge disaster and we will do … anything we are asked to do to help out.”

“Japan is, of course, one of our strongest and closest allies and this morning I spoke with Prime Minister [Naoto] Kan,” Obama said during a news conference here. “On behalf of the American people, I conveyed our deepest condolences especially to the victims and their families, and I offered our Japanese friends whatever assistance is needed.”

Obama received a briefing this morning in the Oval Office on the earthquake in Japan and the tsunami warnings across the Pacific from several senior U.S. government officials.

“We currently have an aircraft carrier in Japan and another is on its way,” he said at the news conference. “We also have a ship en route to the Marianas Islands to assist as needed.”

…
On his Twitter feed this morning, Noriyuki Shikata, deputy cabinet secretary for public relations and director of global communications at the Japanese prime minister’s office, said the Japanese government requested U.S. forces in Japan to support efforts to rescue people and to provide oil and medical aid via the aircraft carrier USS Ronald Reagan, adding his thanks to the U.S. government.

PEARL HARBOR, Hawaii (NNS) — U.S. Pacific Fleet ships in the Western Pacific were converging on Japan to be in the best position to help those in areas damaged by the massive earthquake and subsequent tsunami.

They include the aircraft carrier USS Ronald Reagan (CVN 76), which departed Southern California waters on March 5 for a regularly scheduled deployment to the Western Pacific and U.S. Central Command area of responsibility. Reagan is the flagship of the Ronald Reagan Carrier Strike Group, which includes USS Chancellorsville (CG 62) and USS Preble (DDG 88). All three ships were headed to Honshu’s east coast. It is too early to say what they will be tasked with once they arrive.